In 2011 CNN made a survey of what are the 50 most delicious foods in the world.

Surprisingly for some and delightfully for us here the first place went to Beef Rendang and second place was our all-time favorite comfort food, Nasi Goreng.

But let’s face it this is a very subjective issue.  In fact some foods that are loved by particular cultures are loathed by others. So what actually establishes what is delicious or distasteful?

One of the most distinct food groups that symbolizes the huge diversities in what is or is not considered distasteful or delicious to different peoples is the favorite fermented dish of particular cultures.

Natto; a stringy, slimy, fermented soybean dish that is a staple of the traditional Japanese breakfast.

It is usually served over steamed rice and seasoned with soy sauce or wasabi.

Apart from its offensive texture, Natto has an odor that is a cross between ammonia and burnt rubber. Definitely a challenging food for most Westerners. What Japanese love, others find disgusting.

Cheese is considered in the West to be a comfort food and luxurious delicacy.  A strong Gorgonzola or ripe Brie might be described as sweaty or slimy. Some cheeses also have their own fair share of aromatic impediments and have been compared to the odor of stinky feet. To many Asians society’s cheese in all its forms is utterly disgusting.

But even in the West there are versions of this fermented milk product that pushes the boundary of good taste.

Casu marzu: A sheep cheese popular in Sardinia. The name means “rotten cheese” or “maggot cheese” because, well, it is literally riddled with live insect larvae.

Local pecorino is aged beyond normal fermentation to a stage that is basically infested rottenness. The larvae of the cheese fly are added to the cheese, and the acid from their digestive systems breaks down the cheese’s fats, making the final product soft and liquidy. Locals consider it unsafe to eat casu marzu once the larvae have died, so it is served while the translucent white worms are still wiggling around. Some people clear the maggots from the cheese before consuming it; others do not. 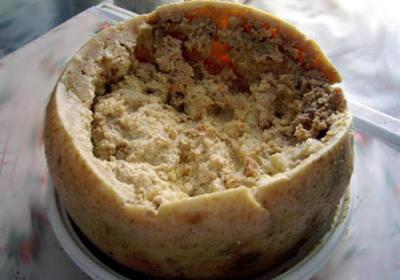 Going North a little to the frozen shores of extreme Scandinavia is another hard-core variant of fermented food, hákarl.

Hákarl:  Made from the Greenland shark is prepared by gutting the shark and then burying the carcass in sand. It is then left to decompose for two to five months, depending on the season. Once the shark is removed, the flesh is cut into strips and hung to dry for several more months.  The history of Hakarl goes back to Viking times. The sharks, while plentiful, were full of toxins that made them dangerous to eat so the Icelanders found a way of making them (in their mind!) edible. Hákarl has a pungent, similar to urine; fishy odor that causes most non-Icelanders to gag and is an extremely acquired taste. Hákarl was described by Chef Anthony Bourdain as “the single worst, most disgusting and terrible tasting thing” he had ever eaten. But hey, those hardy Icelanders love it! 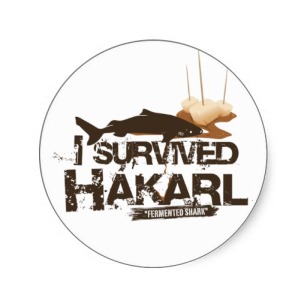 A quick jump to the other side of the globe in search of another favorite fermented food will lead us to Korea where kimchi, which is fermented, spicy vegetables (usually cabbage) is indispensable to the Korean diet, eaten at every meal.  Actually this fermented delicacy has become one of the hottest new food trends in the West with chefs putting Kimchi in everything from pizza to burgers and even pasta.  A perfect example of a once inaccessible and foreign food to Western tastes now making the cross over and it is fair to say that Kimchi has become a globally recognized food enjoyed by many around the world.

Want to wash all of this down with a refreshing drink then why not try the Ecuadoran aperitif Chicha? This delightful beverage combines the alcoholic perks of fermentation with bodily fluids. Chicha is made from a masticated blend of boiled maize (or yucca root) and human saliva.

So why is fermented saliva, vegetables fermented in pots, decomposed shark and maggot-ridden cheese so desirable in some cultures? Is it just the quirky inconsistency of the human condition that we are attracted to and eagerly consume things that give off all the signals of putrefaction, creating foods that are considered disgusting and inedible to some and absolutely delicious to others?

We acquire a taste for certain extreme foods through a cultural legacy, which is also connected to the demographics and customs of different peoples. Indigenous and ethnic foods embody the essential characters and flavors of a region’s ethnic inhabitants. This is also true of the bacteria that make fermented foods possible; they vary distinctly from one part of the world to another. The bacteria involved in making kimchee are not the same as those used to make cheese. They are part of the surrounding environment, weather and geography.

What is considered as disgusting varies according to cultural and ethnic norms.

Certain indigenous foods are eaten as a way of determining who belongs to a particular ethnic background. Particular foods are always associated with an ethnic or religious group. “I am from here, and you are from there.”

Typically, what we consider “inedible” food, we are talking about the foods of the “Other”. It tended to be  natural that one group would consider that “foreigners” eat strange foods with peculiar aromas. We imagined that they would also smell of their strange food.  For example, at one time the Japanese referred to Koreans as “garlic-eaters“ a derogative term because garlic was not a part of the Japanese cuisine and as a consequence they didn’t consider that civilized people ate garlic.

These unaccustomed smells were and sometimes are still associated with the intrusion of so called foreigners and thus are considered undesirable and objectionable. On the other hand, people become more accepted into an ethnic group when they adopt and enjoy eating local food traditions. Meaning you want to become part and be accepted by the local population.

Food is an amazing prism through which to view the multilayered emotions of loving or hating a particular food. Eating is a passion, but it can also arouse revulsion. Curiously though it is in our nature to be attracted to this repulsion. We are always a little curious about tasting some new and exotic morsel, a bite of soft and stinky hákarl or a wormy tidbit of casu marzu, or trying to prove our courage by eating a spicier and hotter Thai curry.

Was it curiosity, or hunger that persuaded the first person to try peppers so hot that they have been used as punishment; raw and slimy oysters and other equally strange sea creatures, the poisonous parts of food that surround edible parts, overripe fruits, roots and vegetables whose toxins require careful preparation before they become edible substances….

How did something like snails, fish eggs, or an animal’s brain ever end up on our plates? What persuades someone to ignore the rotting smell of decay and develop a taste for game birds hung until almost decomposing?

Trying to understand what it is that makes one dish delicious and another not, we need to consider not only the choice of ingredients but also the environment in which it was served and our mood when we eat.

But even within a single, culture, one can find examples of highly cultivated eating that seem to be based on testing the limits of the edible. We tend to take for granted our ability to distinguish that which pleases because it tastes good and those foods that we are encouraged to enjoy because of their exotic or foreign nature. In fact the opposite of what we naturally consider as delicious. Ironically foods that at first disgust can eventually become appealing, even addictive.
In the end it comes down to what some people find repulsive or delicious varies greatly not just from place to place but across cultural and social barriers.

Happily though today, as international travel is accessible to more people and cultural lines are becoming blurred the global village and the different smells and tastes and visual sensations of once foreign foods is becoming the norm, even the expected.