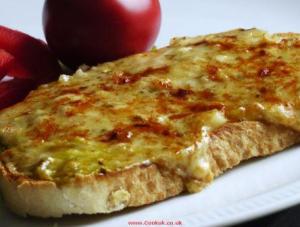 2 tablespoons Worcestershire sauce, or to taste

Butter for the toast

Toast the 6 slices of bread and spread with butter. Keep warm

Place the butter, cider or ale, Worcestershire sauce and cayenne pepper into a pan. Heat the ingredients gently until all the butter has melted.

Slowly add in the grated cheese. Stir continuously until the cheese has melted and the sauce is smooth and creamy in texture. Do not allow the sauce to get too hot or the cheese will become stringy.

Divide the mixture evenly between the slices of hot toast.

Toast the rarebit under the grill until the cheese bubbles and has started to brown. Serve hot.

This next recipe is my cosmopolitan version of Welsh rarebit

2 tablespoons Worcestershire sauce, or to taste

Preparation 1. Put butter in a saucepan over medium heat and, as it melts, stir in flour. Continue to cook, stirring occasionally, until golden brown and very fragrant, 3 to 5 minutes. Stir in mustard, paprika and cayenne, then whisk in beer and Worcestershire sauce. 2. When mixture is uniform, turn heat to low and stir in cheese, again stirring until smooth. Remove from heat and pour into a broad container to set (you can refrigerate for up to a day at this point). 3. Spread mixture thickly on toast and put under broiler until bubbly and edges of toast are crisp. Serve immediately.

Wine:  Even though this may be the quintessential British nosh up and it would seem natural to suggest a pint of strong Ale for this savory dish; I believe a zesty white wine is more appropriate.  We can head to northern Italy and pour a refreshing Pinot Grigio or with a La Fleur Jaune Pouilly-Fuissé. The ripe apple flavors in the wine will marry well with the savory cheesiness of the Welsh Rarebit