Raw-meat dishes can be found in most ethnic and national cuisines — the Vietnamese bo tai chanh , a  mix between beef tartare and ceviche with

Ethiopian  kifto and gored gored, Lebanese kibbeh nayeh, Italian beef Carpaccio  and even Japanese beef (and sometimes horse meat) sashimi are all common, everyday raw meat dishes in their counties of origin but  are now increasingly making the rounds of today’s trendy restaurants. For a while tartare and other raw beef dishes fell out of favor after the mad cow and E. coli scares of the 1990s.

But as more chef owned restaurants and the chefs themselves rediscover the delights of raw meat and are more mindful of the circumstances in which their animals are raised and the better hygienic conditions of the kitchen production of these dishes that diners who were once wary of eating raw meat might be more willing to experiment. Tuna and other fish tartars and Carpaccio are also very popular raw dishes that have found permanent places in most upscale restaurants.

Every once in a while I get a real beef craving and my appetite turns to one of my all-time favorite raw meat dishes, steak tartare the classic dish of the freshest raw meat perfectly chopped and flavored with traditional condiments, carefully plated and a beautifully presented sometimes with a raw egg yolk to be mixed in.

There are many myths about the origin of steak tartare, most relating to marauding Mongolian horsemen who would place a wad of horsemeat under the saddles of their horses to tenderize them while pillaging some poor village. A nice story but the reality is somewhat less romantic (and a lot less disgusting).

The actual dish most likely originated at the beginning of the 20th century, known as steak a la tartare, which meant “steak served with a tartare sauce.” Soon developing into a dish of uncooked, chopped beef mixed with Tabasco, Worcestershire sauce, shallots and capers, all topped with a raw egg yolk.

A challenge for the uninitiated at first but when made well becomes, for the carnivores amongst us an addiction.

I highly recommend you try to make a traditional French tartare — similar to the ones that were served in Parisian restaurants around the turn of the 20th century, when the dish was called “Bifsteak a l’americaine”   (the original Hamburger?) mixings diced filet steak and shallots in a sauce of minced cornichons, chopped capers, Dijon mustard, lemon juice, Tabasco and Heinz ketchup. 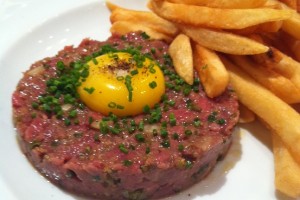 For the tartare dressing, combine all the ingredients and mix well.

For the steak tartare, take the sirloin, remove all the fat and sinew and finely dice the meat. Then add the dressing and mix well. Taste and add more salt and pepper if necessary. Toast two slices of baguette per person and dress with olive oil and salt.

Arrange the steak tartare on a plate, place a quail’s egg with the top cut off on top of the meat, garnish with the toast and serve with a side salad.

Beef Carpaccio—known to most simply as Carpaccio—is one of the most famous of Italian antipasti. Ccarne cruda all’Albese, a Piedmontese dish —thin beef slices macerated in olive oil and lemon, adorned with arugula and shavings of Parmesan cheese. The original Carpaccio was invented by Venetian hotelier Giuseppe Cipiani, of Harry’s bar fame.  The story goes that Cipriani invented the dish in 1963 for a friend, Amalia Nani Mocenigo, who had been advised by her doctors to eat raw meat. Originally the dish was served with a sauce of mayonnaise scented with lemon and Worcestershire sauce and thinned out with a bit of milk. He called it “Carpaccio” after the 15th century Venetian painter, Vittore Carpaccio, whose work was very popular at the time, saying that the contrasting red and white of his new dish reminded him of the painter’s work.

Beef Carpaccio is simplicity itself, but requires best quality ingredients and a bit of elbow grease to pound out properly thin slices of beef. The adding of arugula and Parmesan cheese commonly served with Carpaccio today was a much later addition.

These days, ‘Carpaccio’ has become a generic term for thinly sliced raw beef or fish—or just about anything else—sauced or garnished. But try the original version once in a while.

100g per person of beef, preferably sirloin, sliced as thinly as possible

A batch of mayonnaise (homemade is best), made with one egg yolk, a shot or two of Worcestershire sauce, a squeeze of fresh lemon, salt and white pepper and a few spoonful’s of milk, enough to achieve a sauce-like consistency

Take your beef slices and, placing them between two slices of wax paper, flatten them out with a meat pounder until they are as thin as you can manage without ripping the slices. The slice should ‘grow’ to almost double their original size.

Divide slices into chilled plates, arranging them in one thin layer, covering the surface of the plates completely. Drizzle some of the sauce over meat on each plate and let marinate for 2 to minutes. With a peeler make some shaving of Parmesan and dispense 3 or 4 to a plate and serve immediately.

If eating raw meat is not your thing and you are more comfortable tucking into a plate of raw seafood then Ceviche is just for you. Ceviche, most historians agree originated in South America during colonial times in the area of what is today Peru. Most likely the precursor to the dish was brought by Moors from Granada who came along with the Spaniards. The dish eventually evolved into what nowadays is considered ceviche, probably now the unofficial foodie mascot of that country.

At its most basic Ceviche is raw fish or seafood marinated in citrus juice and spices; the acid in the juice “cooks” the flesh in much the same way as heat cooking would. The flesh becomes opaque, the texture firmer and dryer and allows the flavors to remain perfectly uncooked fresh. Needless to say the fish or seafood must be perfectly fresh and pristine. There are probably as many variations of this iconic dish as there are cooks in Peru. Below is a classic version.

Marinade (known as Tiger’s Milk to the initiated)

To make the tiger’s milk: Put the fresh ginger, garlic, cilantro and the lime juice in a bowl. Stir and then leave to infuse for 5 minutes. Strain the mixture through a sieve into another bowl. Add salt and chili and mix well. This will keep for 4 hours in the fridge.

To make the ceviche: Rinse the onion and then leave it to soak in iced water for 10 minutes. Drain thoroughly, spread out on a paper towel or a clean kitchen towel to remove any excess water and then place in the fridge until needed. This will reduce the strength of the onion and help to keep the slices crisp.

Cut the fish into uniform strips of around 2 cm. Place in a large bowl, add a good pinch of salt, and mix together gently with a metal spoon. The salt will help open the fish’s pores. Leave this for 2 minutes and then pour over the tiger’s milk and combine gently with the spoon. Leave the fish to “cook” in this marinade for 2 minutes.

Add the onion, cilantro, chili, and sweet potato to the fish. Mix together gently with the spoon and taste to check that the balance of salt, sour, and chili is to your liking. Divide among serving bowls and serve immediately.