“Tell me what you eat, and I’ll tell you who you are,”wrote renowned gastronome Jean Anthelme Brillat-Savarin in 1825. 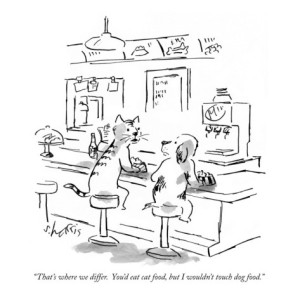 You are what you eat

Obviously we have to eat or we would die of starvation but there is more to it than that. We love to eat; eating makes us feel good; certain foods actually secrete enzymes that stimulate our brain cells to increase pleasure and other desires.

All living organisms eat in one form or another. Most animals hunt or scavenge their food source but humans are the only animals that prepare and cook their food. Making cooking more than a necessity, it is what defines us as human, and separates us from the rest of nature. We don’t just eat, we dine and because dining is a group or social event, the way and what we eat defines our place and who we are in society. We define our connection to our families through foods and cooking. Our parental memories often relate to certain family dishes or mom’s home cooking. We connect through invitations to dinner, “let’s do lunch” , business deals are sealed over a meal, the romantic dinner for two etc etc etc.

Cooking and eating are two of the most effective therapies in reducing stress, calms rattled nerves, help to heal or at least soothe a broken heart and is a remedy for boredom and insomnia. Eating is a social need. It encourages our creativity and helps us communicate with our social environment. Eating as a group or in a social setting has always been a way for people to preserve a bond with each other whether from parents to children or to welcome strangers or visitors into the larger group. Thus food becomes a symbol of social security.

Like any living organism our body needs fuel but actually, sustenance plays only one part in how we choose the foods we eat and most of human history was determined by food habits. Not all of our food preferences are based solely by what is available. All cultures go to considerable lengths to obtain preferred foods, and in many cases the foods we eat are more likely to be governed by religious or other perceived prohibitions.  Food taboos and local delicacies frequently come about because of these cultural and religious beliefs; as they say “one person’s meat is another’s poison”.

For example Because of the history of coexistence and interdependence most European societies will not eat horse and dog while in certain Asian societies this taboo does not exist. One Cantonese saying goes that anything that walks, swims, crawls, or flies is edible and the only four-legged things that Cantonese people won’t eat are tables and chairs. A majority of Chinese based Asian cuisines contain ingredients that Westerners will instinctively turn their noses up to including snakes, snails, insects, worms, chicken feet, duck tongues, and entrails.  The French are notorious for their preference for well matured and strong smelling cheeses, snails and frog’s legs, the English in the main find these foodstuffs repugnant. Muslims will not eat pork; while in the Jewish religious dietary tradition not only pork is forbidden along with shellfish but also a whole litany of dietary (kosher) regulations are maintained. Hindus have a religious taboo on beef – and the list goes on. People will not just eat anything, whatever the circumstances. There are examples of protein rich insects that are integral to African, Asian, native Australian, and Latin American cuisines, but hardly be accepted as part of the Western European diet.

How can you eat that?

Every ethnic and national culture consumes a wide variety of different food stuffs both vegetable and animal and one country’s delicacy is sometimes regarded with disgust elsewhere. Nonetheless, there certain similarities that might hark back to time to our common origins.

All cuisines have a rudimentary form of carbohydrate—such as potato, pasta or rice—and celebratory foods tend to come in the form of sweet treats. Most diets also feature high-value foods that indicate social status (e.g. in the west caviar and in Asia difficult to obtain foods like Bird’s nest or shark’s fin), and many cuisines have different foods for children. But in the face of these similarities in food culture there is a vast difference in taste or what one culture deems delicious another finds distasteful.

Do “unusual” foods make you squeamish? Remembering back to our child hood we can recall foods that other families ate that were simply “weird” to our mind. Possibly they came from a different ethnic background but as our taste buds matured, we began to expand our culinary boundaries and as different cultures intermingled what was once strange is now normal but even so our culture still tends to set the boundaries. Most Chinese find cheese repugnant, for example, and rare is the European who would attempt to eat spicy stewed chicken feet, a delicacy in China.

But as the world gets smaller, regional favorites become less foreign, less “weird.”  Try some of these if you dare!

Balut:This Filipino delicacy is a fertilized chicken or duck egg that is nurtured until an embryo develops, and then soft-boiled and eaten juices and un-hatched embryo together.

Durian: An acquired taste—and smell—durian is a large, spiny green fruit from South East Asia with a dense skin that protects a creamy center that some swoon over and some find putrid. Durian has such a distinctive odor (sewer-like is the most common description) that it has been banned on public transportation in some countries.

Fugu: Dozens of people in Japan die each year from eating this blowfish, which has an organ containing a toxin so deadly that only specially licensed chefs are allowed to prepare it.

Haggis: A Scottish favorite made from the chopped heart, lungs, and liver of lamb or beef and mixed with suet, oats, onions, herbs, and spices, then stuffed into a sheep’s stomach, haggis is not for the faint of heart or the weak of stomach.

Hakarl: An Icelandic dish that consists of putrefied shark meat that has been buried for months, then dried for a few more months, Hakarl is typically accompanied by a shot of caraway-flavored schnapps, possibly to mask the smell.

Hu-Hu or witchetti Grubs: A New Zealand and Australian native food, the larvae of the certain beetles can be found in rotting logs or trees and eaten raw or cooked. Connoisseurs describe the grubs as tasting nutty or like chicken.

Jerusalem Mixed grill: This cholesterol loaded local Jerusalem delicacy contains chicken hearts and livers, spleen and testicles grilled with onion, garlic and an array of Middle Eastern spices all stuffed into a pita with a large salted pickled cucumber.

In most ethnic cultures certain foods stuffs are thought of as delicacies, not for their taste, but for their medicinal or health giving benefits.

In Asia there is a whole food culture based on the consuming of just about every creature that walks, swims, crawls, slithers or flies—domestic, wild, and endangered—and every part of the creature’s body, inside and out is used to create a myriad of health benefiting elixirs and dishes.

The inner organs or offal are bestowed with special properties that can be transferred to the diner when eaten. It is widely held that the penises of many animals cooked fresh or dried bestow the consumer with healthy sex lives, rooster testicles help women stay young, Just as in the west oysters where are considered or believed to be an aphrodisiac

Most Westerners today, unused to this culture of food related folklores and dual functions of food and medicine find some of these animal products a source of repugnance although in both industrialized and developing nations the world over eating the testicles, cheeks, lungs, kidneys, hearts, and livers of animals was once the norm emerging from a subsistence culture in which nothing was wasted. This still applies to many countries around the world where people struggle to get enough to eat.

Ironically though the status of offal has recently gained a sort of retro/trendy food status again with these once lowly regarded off cuts finding their way into the menus of some of the trendiest and world-renowned restaurants.

Food or more accurately the preparation of food changes the basic need to eat from sustenance into culture. It can bring people together, but can also set them apart. When we become involved in some way with the process of preparing food, whether it is hunting, gathering, shopping, cooking or assembling the components of a meal then that becomes a ritual that is basic and essential to our humanity. We strengthen our bonds and proclaim our individuality from the act of preparing food and sharing it with family, friends, and even strangers.

What we eat gives us our individual character; a specific identity that can reflect in our relationships, priorities, and values.  In my life, food plays a large role.  I do not celebrate religious holidays, but I do relate to the fact that certain types of foods eaten at a certain period represent my own cultural identity and me.

So in the end it all boils down to the fact that we are what we eat, and we are defined by how we eat.