According to popular legend it was the ancient Egyptians who discovered the delights of fattened goose Liver around 2500 B-C. They noticed that the liver of the geese in an around the Nile during the migratory season were bigger, paler and much tastier during this period than the rest of the year. They realized that the geese were overfeeding themselves before their migration thus the liver acted as a sort of long distance fuel tank from which the bird get the energy needed for its long and tiring journey.

Since these fattened livers could only be obtained during this short seasonal period, the hunters and farmers of the time decided to reproduce that natural occurrence themselves all year round. So they began to force feed the domesticated geese with figs and corn. In this way the art of Foie Gras production was born

When the Roman legions arrived in what is now the Alsace part of France  they  began using geese to guard farms and in the 13th or 14th century, it is said that Jewish farmers developed and refined the art of feeding geese to produce enlarged livers. Who knows maybe they acquired this knowledge while enslaved in Egypt and brought it out with them during the Exodus with Moses? Anyway I like to think it happened this way!

In any case these mediaeval farmers were known for their high quality foie gras.

the liver of force-fed geese, was further enhanced and perfected by Jean-Pierre Clause, chef to Marshal Contades, the military governor of Strasbourg from 1762 until 1788. Since then  no one has been able to resist foie gras, so meltingly soft and tender that a single bite has been know to make a grown man cry.

Disapproval of foie gras making commonly centers on the process of “gavage,” or “force feeding” of the ducks and geese. What does one generally understand from this process though? The expression “force feeding” does carry a negative connotation true but what is the reality? Do we need to humanize ducks and geese? Do they feel the same things, in the same way, that we do. This has been the argument of vegetarians and if we accept this argument then the eating habits of the majority of the world’s human beings are in question. I for one do not accept this argument, not that I want to see animals suffer just to feed my appetite but  if we are trying to determine whether these birds suffer, we must consider such suffering from the point of view of the birds, and not how a human would view it.

Poultry raised for foie gras commonly spend the first 12 weeks as free-range birds, and there is no force-feeding done during this period. Basically they have pleasant lives as far as most animals raised for food have and you cannot say that they suffer in any respect, unless you are entirely apposed to animal husbandry for your own ethical reasons.

After the initial 3 months, gavage will then be introduced 2-3 times a day over a period of 2-4 weeks. In this force-feeding, a metal tube or pipe is lowered into a duck’s throat for no more than 2-10 seconds while the feed is being introduced. This is a very quick process.  Do the birds suffer during these very brief instances of force-feeding? Actually Gavage mimics closely how birds gorge themselves prior to migration. This is why of why we should not humanize these birds. Unlike humans, these birds have systems designed to adapt to such over eating. There will always be those that oppose this practice and I respect their opinion but as  a dedicated foodie I reserve the right to respectfully disagree.

Most new comers to Foie Gras believe that there must be something very difficult about preparing goose livers in their own homes. Nothing could be further from the truth. In fact, even though goose livers have been regarded as one of the greatest culinary delicacies since the time of the Egyptians, they are not difficult to prepare in the kitchen so long as one follows a few simple rules.

First, when buying foie gras be sure that they are creamy-white in color, barely tinged with pink and firm to the touch.

Second, to show how very simple goose liver preparations can be, keep in mind that one of the finest and simplest ways to treat a goose liver is to slice it and then sauté it in butter. Remember that while the outside of the liver should be nicely browned, the inside should remain pink. After the livers have been cooked, remove them from the skillet. To the butter in the skillet add a bit each of Marsala wine or other heavy wine and a small amount of veal or beef stock. Over a low flame, scraping the bottom of the skillet with a wooden spoon, cook this mixture until it is slightly reduced and then pour this sauce over the livers to serve.

To make such a dish even more celebratory, place the foie gras slices on thick slices of cooked potato that have been sautéed in butter. Pan fried tournedos of fillet steak topped with a sautéed medallion of Foie Gras with a rich brown sauce spooned over yields the famous dish tournedos a la Rossini. It is also appropriate to garnish sautéed liver slices with strawberries or peeled green grapes.

Third, do not ignore the possibility of cooking goose liver over open charcoals. When this method, which 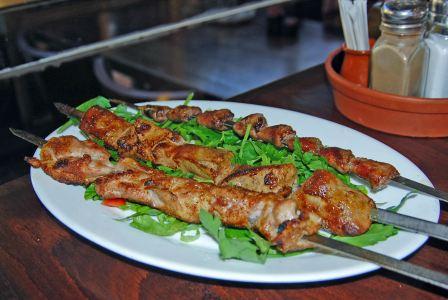 has its roots in the inexpensive restaurants of the “HaTikva Quarter” in Tel Aviv, first started, great chefs scoffed but today grilled goose liver appear on the menus of some of the best and most exciting restaurants of Europe and North America. Even the Japanese have found (in their most sophisticated restaurants) that grilled cubes of goose liver on skewers with a well made teriyaki sauce can be exceptionally good.

Fourth, to cook a goose liver whole, simply brown it in very hot butter, transfer the liver to an ovenproof casserole dish and pour over a mixture of butter, Marsala wine and thickened veal or beef stock. Cover and seal the casserole and bake until the liver is done.

Fifth, a confession – there is one goose liver dish that even I will not attempt at home. Pate de foie gras (or, if you prefer, goose liver pate) is a dish that takes so many hours to prepare that I recommend it only to the most devoted at-home cooks. As to the rest of us, let us thank heaven that pate de foie gras appears on a regular basis on the menus of many of the world’s fine restaurants.

Following are three recipes, each of which I have used on numerous occasions in mt restaurants. Each is an outstanding example of the versatility of Foie Gras.

Before we get into the recipes, however, a few notes:
1. Serving pate or terrine de foie gras with overly sweet jams or jellies is a nasty habit that should be avoided at all costs. Instead do as the French do and have plenty of sweet unsalted butter and fresh crusty bread, a pinch of pink salt and if possible savory sweet onion marmalade.

2. Goose liver and duck liver are interchangeable and are both referred to as Foie 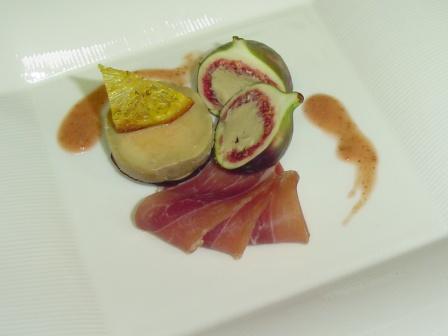 Remove the foie gras from the refrigerator, unwrap and thinly slice. 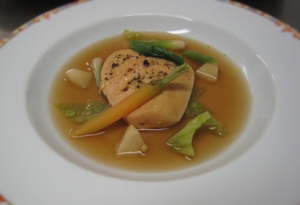 1 stick   of celery, cut in to short lengths

4 each shiitake mushrooms, sliced and sautéed

Lay the shiitake mushrooms in the bottom of 4 deep soup plates. Add the vegetables.

Gently poach the escalope of foie gras in some of the simmering duck or chicken broth, and then place them over the julienne vegetables.

Season with the fleur de sel and cover with hot broth. 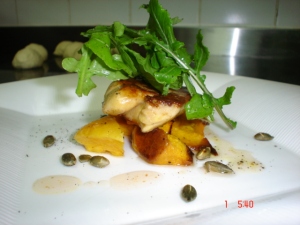 Roast  pumpkin on baking tray sprinkled with olive oil, salt and fine black pepper in a (high) 250° oven for 20 minutes or until tender and slightly caramelized.

Pan-fry the duck liver until just crispy on the outside and still creamy inside. Remove to absorbent paper and keep warm.

De-glaze the pan with verjuice remove from the heat and blend in the pumpkin seed oil and more Verjuice. Season to taste

One thought on “Foie Gras – The controversy, the history and the tradition”